Some say that networking does not lead to results for them although I find that face to face and social networking does work.   Having just read Ellie Becker’s great post on this subject (who I met on Twitter), it occurred to me that I should write a short post on ‘a day in the life’ of my networking in London.  Before that, I must play the fantastic Beatles song of the same name – a rare live studio version:

11.29 am Arrived at the HQ of Premier Christian Radio in London.  I had been invited for a bacon roll and coffee with no particular agenda.  On arrival, the marketing director said “Would you mind running a 90 minute creative thinking session for our people to help us formulate our next public fundraising campaign?  We have no money but will try to think of some way to thank you if it goes well”.  I said yes, assuming that he was talking about something for another occasion, to which he replied “Wait here, I’ll get them in”.  The session started 2 minutes later!  Much of my work is pre-planned and it was therefore refreshing to be asked to do a live session with no warning.  I’m pleased to say that the session went so well that Premier have offered to write me some PR and broadcast it widely.

1.37 pm Onwards to Lloyds of London for a coaching session / exchange with Alex, who works as a change agent there.  Nothing Rock’n’Roll about that I hear you say?  Well, Alex is also a talented singer with suburban blues band Bastedo, having had recording / writing contracts with Sony.  Turns out that Premier Christian Radio want to record a version of the Aretha Franklin song R.E.S.P.E.C.T for their campaign.  Alex is a follower of Premier and an extremely talented singer / songwriter.  Who would have thought of that piece of serendipity?

3.34 pm Arrived at the offices of Pricespective to meet someone who I last met on my 1st day at work 35 years ago.  How did we reconnect?  Linkedin.  I think we will end up doing a number of things to our mutual advantage, some of them social (my friend has also turned into an author) and some of them business related.  Upon leaving his offices, I noticed a door in the Foyer marked ‘music room’.  I asked the guy at the desk what this was about and it turned out that the law firm in the building has a rock band, which he is part of.  Cards and book details were exchanged immediately.  I can’t wait to hear the Lawyers rock!

Networking lesson # 3:  Open all your senses and be curious.

5.23 pm Arrived at the offices of The Halcyon Galley to meet with their Finance Director, another long lost connection, found again via Linkedin.  Turns out that he is also interested in coaching and we’ve agreed to share our collective knowledge, skill and experience in the area via my master NLP practitioner.  He is also on the lookout to provide free coaching sessions to help him complete his coaching diploma.  Write to me here if you are interested?   Some strategy work may be in the offing as a result of our random reconnection.  It also turns out that the Halcyon may be interested in getting involved with The London Mapping Festival – A celebration of all things geographical and IT from now until the end of 2012.

Networking lesson # 4:  Get up early, get home late, discover business!

Networking works, both face to face and online, but you have to work at it.  It just occurred to me that my post on my pub meeting with Bernie Torme, guitarist for Ozzy Osbourne and Ian Gillan also has a networking theme.  Contact me if you would like to make your networking work better for you.

Coming up next – 5 MBA Lessons from Lady Gaga – sign up to the blog to get a weekly notification or to get your free copy of my new book Punk Rock People Management. 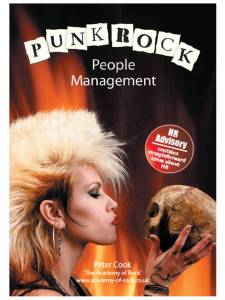 A no-nonsense guide to Human Relations

Finally, I know this really has nothing much to do with the post, but I just found Jeff Beck playing the Beatles song ‘A Day in the Life’ in his inimitable style with the brilliant Tal Wilkenfield, so I will leave you with this.  Especially for my network contact and friend Jason Bell of Datasentiment, bass player extraordinaire.