It’s been another rocky year in 2013 as I reflect on plans for my 20th year in business with Human Dynamics and The Academy of Rock.  Thank you all for your contributions to this blog and in many other ways – they have all helped keep a sense of perspective and balance in times of great turbulence.  A major theme of 2013 and in the last few years of recession generally for me has been reinvention and renewal.

After several years of incredibly difficult trading conditions, this year brought some respite in terms of projects of a more significant nature.  This has followed considerable reinvention and renewal of what we offer and via the expansion of our global network to meet the needs of larger companies and the increasing desire of those companies to have an offer which can be scaled and taken anywhere in the world.  The highlights of this were:

I released my 7th book “The Music of Business”, having gained an endorsement for the book from Harvey Goldsmith CBE, the man behind Live Aid via a strange set of circumstances.  I was also delighted to be invited to contribute to David D’Souza’s book “Humane Resourced”.   I’m now trying to fit in the writing of a major tome on innovation and creativity for release in 2014. 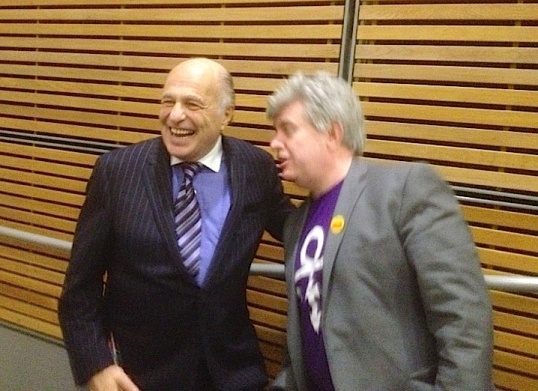 Presenting Doug Morris, CEO of Sony Music, with The Music of Business – Click for your copy

At the level of pure pleasure, I compered and performed at a Charity Event, which raised a tidy sum of money for Demelza House Children’s Hospice, an absolutely vital charity ignored and overlooked by Governments.  I was also invited to jam with a former member of the Bank of England’s Monetary Policy Committee at Dr Andrew Sentence’s garden party.  Andrew has just released his first book on the economy entitled Rediscovering Growth : After The Crisis.  He has also asked us back to his 2014 garden party to perform with the band so I will have to get practising as his son Tim is a virtuoso jazz player!

Andrew Sentance at a recent event. The other guy did not show up to the Garden Party … Click on the picture for Andrew’s new book

I also wrote and recorded a rock song to unleash some of my angst about how we have all contributed in smaller or larger ways to the ‘buy now, pay later society’ ever since hire purchase appeared as an idea in 1920’s America.  The result was a pithy and deeply ironic song about economics, banking and shopping called “Fiscal Cliff” which nearly reached the charts.  We had an absolute hoot recording it. Here’s the video, which we made from start to finish in two hours – So, it’s not exactly a Hollywood production but not a bad job nonetheless.  Feel free to download a copy on iTunes, Amazon or Google Play for Christmas – All proceeds are going to Demelza Children’s Hospice.

Reasons to be cheerful

One of the most important part of running a business is the people you get to work with and come into contact with. Can I extend my thanks to the following people, who I’ve had the pleasure of working or collaborating with in 2013 as part of the Human Dynamics and Academy of Rock offering.  To Steve Gorton, Marjolein Jupijn, Val and Errol Whitter, Simon Heath, Dave Brooks, Bernie Tormé, Ben Weinlick, Andrew Sentance, Professor Peter Childs, Rowena Sian Morgan, David D’Souza, Trevor Lee, Professor Adrian Furnham, Richard Strange, Phil Hawthorn, Doug Shaw, Nadine Hack, Dr Reg Butterfield and many others.  I look forward to many more collaborations in 2014 and beyond.  Also thanks to my   clients Roche, Johnson and Johnson, Nokia, Fuji Film, Imperial College London, Lloyds, Angel Trains, The Chartered Institute of Purchasing and Supply, The Association of Clinical Data Management – I quite literally could not have done it without you!

In 2014  it is the 20th anniversary of my companies Human Dynamics and The Academy of Rock.  For me this means:

Continuing to challenge the stereotype that the ‘bigger branded consultancies’ are safer bets for procurement departments to choose.  For me, this means trading from a platform of intelligent content and thoughtful customer focus rather than handing out branded pens and fluffy toys to clients.

Developing the global network – for too many years, people have seen the company as a one-man business when we have a worldwide network of thought leaders and associates and we also work in partnership with others.  One sign of progress in this area happened in 2013 when Nadine Hack asked us to collaborate in a piece of global consulting.  This was a true honour – Nadine is recognised as one of the worlds’ most trusted leaders on ethical behaviour in organisations. She has worked with Nelson Mandela, Barak Obama and many of the world’s greatest corporations to change their collective mindsets about ethical and sustainable business strategy and practice.

To complete the research and writing of my 8th and 9th books on Business Innovation and Creativity.  This will require the usual ‘get up early, stay up late strategy’ …  We’ll have to see if and how a PhD fits in …

To find more time for looking after myself.  Yes, this includes cycling when it’s cold and wet!  Damn – I’ve told everyone now, so I’ll have to do it  🙂  Making time for my son, who is suffering under the weight of constant tests and exams in an education system which now resembles the arrival of The Ministry of Magic in “Harry Potter and the Deathly Hallows” at my local school.  And finding time to support my wife as she cares for her mum.

Wishing you a happy and prosperous New Year !

About the Blogger:  Peter Cook leads The Academy of Rock – Keynote events with a difference and Human Dynamics – Business and organisation development, training and coaching.  Contact via peter@humdyn.co.uk or +44 (0) 7725 927585.  Check out our online Business and Music programme for FREE via The Music of Business Online. 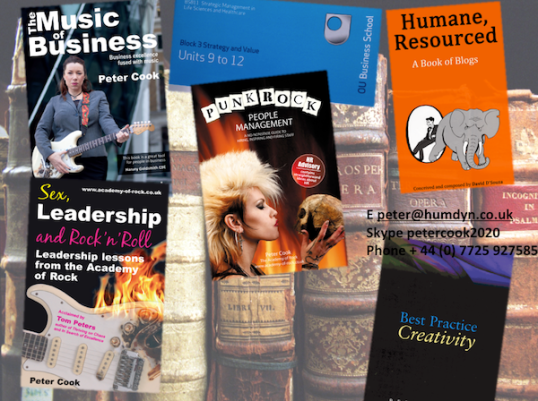 Rage Against The Brexit Machine