I woke to the great sadness at the news that BB King died last night. For me as a guitarist his style of playing was instantly recognisable, built around purity and simplicity of the blues that goes straight to the heart. BB King would sometimes play an entire solo from more or less one note, using his unique ability to express himself with the minimalism that comes from genius, plus a sweet tone that became his trademark. This is a man playing from his heart, uncluttered, with perfect phrasing, pitch and poise and not a “speed king”. He also connected with his audiences through his voice, his humour and his authenticity.

I own a Gibson 335 partly as a result of BB King’s playing (King played a 355, but the 335 was the best I could do money wise at the time). There is nothing more to say except to share some of the great man’s work: 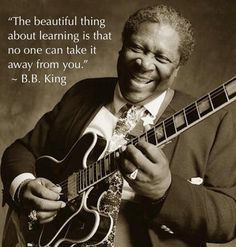