I was completely blown away by the Bob Dylan painting and sculpture exhibition at The Halcyon Gallery which continues until December 11.  Blown away, because (a) I’m not a great Bob Dylan fan and (b) I had no idea that he was also a talented arc welder !!

“The Beaten Path” is an absolutely amazing collection and insight into the workings of Bob Dylan’s mind.  Sketches taken from his down time whilst gigging made into full size paintings reveal a United States of America that time has forgotten – the feel of the pieces very much reminded me of my good friend Bill Nelson who shares a love of outlandish American automobiles and the culture of the 1950’s – probably emanating from Jack Kerouac and The Beat Generation. It occurred to me that Dylan’s nostalgic paintings of a world of “Happy Days” cafes, suspension bridges, hot dog stands, art deco motels and a thriving industrial landscape perhaps explains the Trump triumph.  A pity Dylan did not run for President – he has better catchphrases than our Donald , if a little longer …

I’m not really a big Dylan fan but started to take a much greater interest in his work when he started making Radio programmes. He has a deep ironic wit not seen since the time of John Peel. I was blown away by the socio-economic observations that Dylan makes in his painting, fuelled by his wit and a degree of irony. None more so in this painting of the Paradise Motel where Dylan wryly observes “Vacancy Sorry” in an early version of “Trip Advisor”: 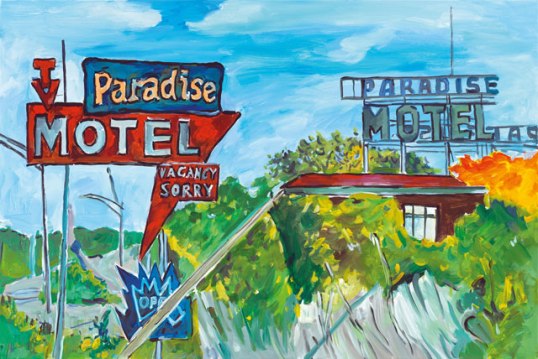 I did not know that Dylan has an arc welding kit in his backyard (as of course we all do!! :-).  It turns out that he has an extremely rare and creative talent for fusing everyday tools into beautiful sculptures.  Dylan is seen working away at one of his pieces below: 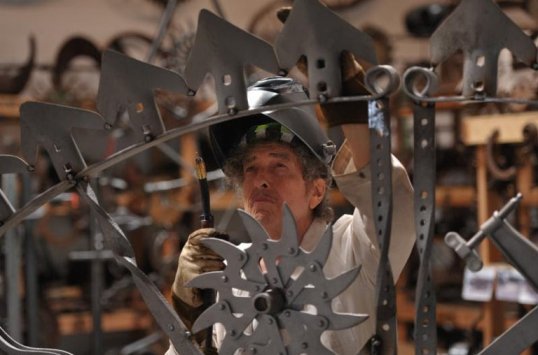 Bob Dylan in the studio

The exhibition has something for everyone, from a glorious table top book of the artworks at £55 through to a flight case containing the same with individually produced “stickers” of the various places that Dylan stayed as a timepiece and other artefacts from the “Route 66” era.

Check out the exhibition which runs until December 11 at The Halcyon Gallery.

Peter Cook leads Human Dynamics and The Academy of Rock. Author of 7 books on business leadership, creativity and innovation acclaimed by Tom Peters, Professors Charles Handy, Adrian Furnham and Harvey Goldsmith CBE. His latest book can be found at Bloomsbury.com 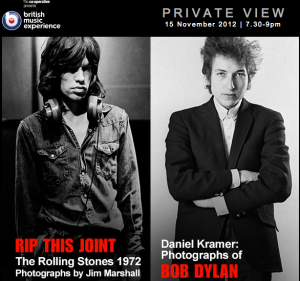 The other week I was invited to a private viewing of classic photographs of The Rolling Stones and Bob Dylan at The British Music Experience by the great people at MusicConnex with my friend Guy Cresswell.   This afforded me the rare privilege of meeting Harvey Goldsmith and presenting him with a copy of “Sex, Leadership and Rock’n’Roll“.  I pointed out that I’d been to a lot of Harvey’s gigs but he never seemed to show up at them!  I am now waiting to find out if he enjoyed the book and whether he has time to give me a quote on the new book “The Music of Business” out in January 2013.  That would be just awesome as young people say.  Apart from all that, it was fascinating to learn about the transition of Dylan and the Stones life through the pictures and archive videos of their performances.  What would you say we learned from them?   How has this has a permanent impact on our culture?   Post your thoughts on the blog. 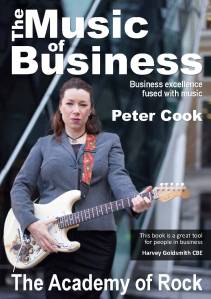 The new book “The Music of Business” has four themes: Strategy; Creativity; Innovation and; Change, with a wide selection of articles.  I’m currently looking for endorsements from business people, senior academics and music luminaries so please get in touch if you fit the bill.

An unexpected surprise was to bump into the lead singer of The Blockheads, who seems to share a number of network contacts including John Otway.  Here’s a picture of Derek  the Blockhead with me and the Jester himself: 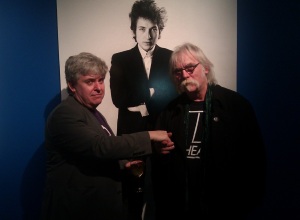 The British Music Experience exhibition on the Stones and Dylan runs until February 3rd at the O2.  It’s well worth a visit, if you have a few hours to spend in London.  Let’s remind ourselves of Jagger’s work in his heyday:

Footnote:  I did indeed get a reference – The hallmark of a great person is someone who makes you feel like you are the only person in the room even when they are themselves furiously busy.  Harvey Goldsmith is such a person:

This book is a great tool for people in business. At the end it answers a lot of questions and then asks a lot more.

I am privileged to belong to The Stone Club.  Led by Carole Stone, former producer of BBC’s flagship Question Time.  The Stone Club is a meeting place for minds, connecting businesses, social enterprises, entrepreneurs, media and politics.  During my time attending The Stone Club, I have met Professor Charles Handy, Michael Buerk, the entrepreneur Lara Morgan, senior executives for Fortune 500 companies and quite a few less famous but equally phenomenal people.

I first met Carole many years ago where we shared a stage at Pfizer alongside John Otway.  Carole’s last networking event had an extremely engaging presentation and dialogue on the art of empathic conversation in a complex and changing world.  This session was jointly presented by Oman Krznaric, writer, cultural thinker & Co-Founder of The School of Life, and Karl James, Director of The Dialogue Project.

One of the phenomenal people I connected with at this event was Andrea Ehrenberg who offers live graphic facilitation.  Here is the rich picture / word collage that she produced live during the conversation in front of about 70 people.  An amazing feat.  Although I am an expert mind mapper, Andrea combines systemic and creative thinking with a more artistic approach than my own fair hands are capable of.  Check her work out for your next live graphic facilitation event.

The art of empathy

For me, the hallmark of a great networking event is great company, the kind of learning that leaves you with as many new questions as answers, plus a superb social element to the event.   Carole Stone does it all with swan like grace.  Here are some of the questions we explored.  Feel free to post your thoughts here.

Let us finish with a different kind of provocation about the past and future of pop, politics, people and life.  Not Carole Stone, but a Rolling Stone:

Remembering what it was like to grow up in the '80s. www.my-eighties.com